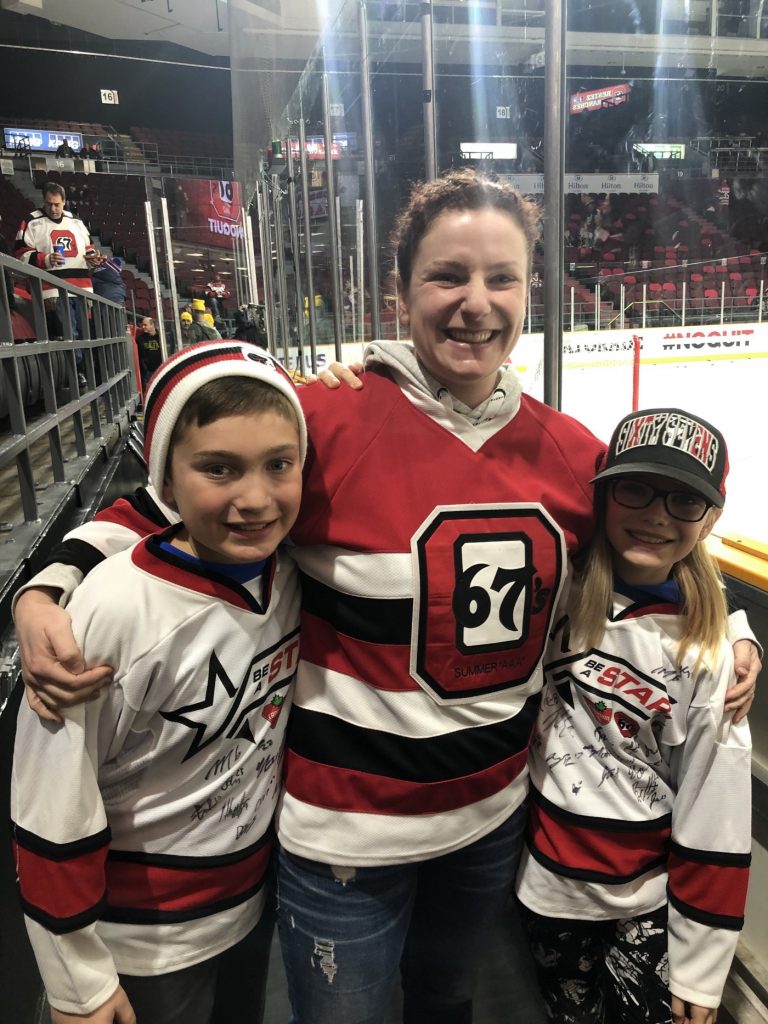 I am a mom, wife, dog/cat lover and nurse practitioner. I spend a lot of time caring for other people which includes my amazing beginner women’s hockey team who inspire me daily to keep striving to do new things!! I love the sport of hockey and am excited to see how women are taking charge of this amazing sport on both the national and local level!!

If you have read any of my “work” in the past you know that I am a hockey mom. I can’t say I love the title. Here’s the definition as stated by the Urban Dictionary: A mother who takes their children to hockey games and is very competitive. They are often found holding Tim’s mugs, shoulders crunched up to their ears, wearing winter boots and puffy jackets trying to stay warm. There is nothing wrong with this definition except for what’s missing from it— it does not imply that we PLAY hockey, but rather we are spectators to the sport watching from the stands and behind the glass.

Before we go further into that, let’s look at another definition — a hockey Dad (I won’t post the urban dictionary version here….it contained a few f-bombs). In this case you think of a dad who helps tie up the kids skates and then promptly ties up their own as they will be helping on the ice. The hockey dad knows hockey, talks hockey and generally doesn’t let anyone get in the way of them getting the best for their kids on the ice. They open and close doors on the bench and will fill in for coaches if someone isn’t there, or they ARE the coach. The thing that bugs me about THIS definition is the automatic assumption that they are hockey players too.

Disclaimer: I’d like to acknowledge here that I too am making ALL SORTS of assumptions — not all Dad’s play hockey, some Mom’s DO play hockey…but I have a point, so stick with me.

I am a hockey mom, but I don’t tend to fit the same mold as some. I push to be on the ice, I play hockey, I slap my stick on the ice to make them go faster, I want to be on the bench opening doors, I joined the board of my daughters association to help break down barriers for women in the game of hockey….there are other mom’s like me, but not many……until now.

The other day I received an email that was sent out to a large group of hockey Mom’s. As I was reading my heart smiled. I saw my husbands name in the email and my own and my first thought is “what has Tony gotten me into now”. The email was written to a group of Mom’s, it explained that my husband had casually offered to help anyone learn to skate or play hockey if they were interested, and then my name was listed as a co-coach (I had no idea…).

My husband has been a hockey coach for many years — he’s a true hockey Dad, but what stands him apart is he will coach ANYONE that wants to learn. He understands the importance of getting women into hockey, be it boys, girls or coed. He understands that as girls — we did NOT have the same opportunities as boys our age to learn to skate or play hockey when we were growing up, not like the opportunities our girls have now. He understands that women need advocates that are already in the sport to help bring them along with them.

And so my friends — the Bambi’s were created.

Last evening the Bambi’s took to the ice for the first time as a group. There was a wide range of skating skill. We taught the basics, getting up from falling, snow plough stops, turning…..the best part though??? Seeing the smiles on their faces the first time they got to shoot a puck in the net or when we scrimmaged at the end. I think the joy was palpable, the Zamboni driver even delayed ringing the bell to give us a bit more time on the ice.

These women are inspiring to me. They are taking a risk and putting themselves out there. It is really really hard to break into the hockey scene. It is a male dominated sport, even in girls hockey. It takes women like this to change that. It is never too late to start playing hockey!

Quote of the night — “It has always been my dream to play hockey like my girls”.

I am so happy you got to live that dream and can’t wait to see where it all goes! Go Bambi’s Go!!